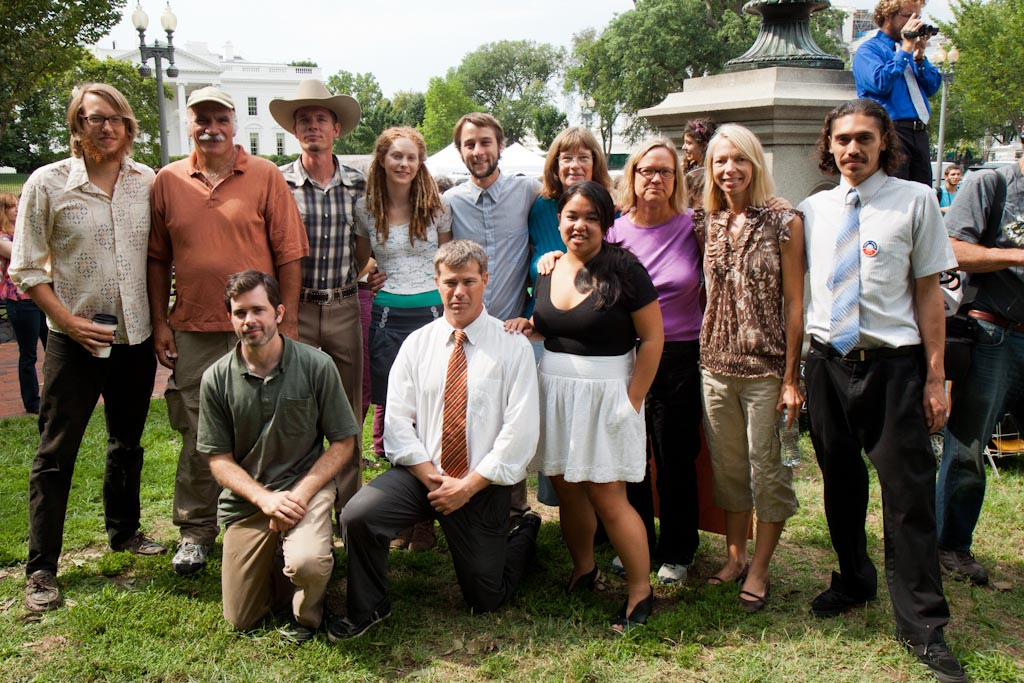 Above I’m pictured with my No Tar Sands Caravan family – nonbiological, but still including parents, sisters, brothers, grandparents and grandchildren. We began as a handful of strangers, all from different socioeconomic and political backgrounds but with one common goal: stop the tar sands industry from wrecking the planet. With this we set out on a carbon-conscious roadtrip from Sacramento to D.C. for Tar Sands Action.

We traveled the country in nine days, with stops in Salt Lake City, where we visited the Peaceful Uprising warehouse and friends of Tim DeChristopher; Lincoln, where we filled up a local cafe for a press junket with charming folks from Bold Nebraska and the Stop the Pipeline tour; and West Virginia, where we toured Kayford Mountain, home to Larry Gibson of the Keeper of the Mountains Foundation and a site constantly threatened by mountaintop removal. Each community we visited displayed its capacity and eagerness to act; the people were ready to protect their homes and families. Extreme weather events, including earthquake and hurricane, had preceded our arrival to D.C., but we were unfazed – we knew a tidal wave was on its way.

Thousands of everyday citizens – farmers, veterans, grandparents and grandchildren – traveled to Washington from all across North America. We came to challenge the tar sands industry, specifically TransCanada and its proposal to build a pipeline through the largest freshwater aquifer in the U.S., threatening First Nations communities in Alberta and worsening the effects of climate change worldwide. My fellow participants and I had to make a choice: hope that petitions and phone calls were enough to sway President Obama to reject Keystone XL, or send a clear, direct message to him by risking arrest in front of the White House.

Ultimately we chose the latter, and in two weeks Tar Sands Action saw more than 1,250 arrests, the largest act of civil disobedience in the history of the environmental movement. My participation in Tar Sands Action showed me that peaceful, courageous action can amplify our message and achieve our goals: after pressuring his administration for a few months, Obama finally rejected TransCanada’s proposal for Keystone XL.

Tar Sands Action was the latest addition to the long history of civil disobedience in the United States. Our country was founded on law-breaking actions taken by everyday citizens: from the Boston Tea Party and the Underground Railroad to modern civil rights icons Rosa Parks and Martin Luther King, Jr., a few courageous folks risked arrest, sometimes their lives, to end an injustice. And, ultimately, they’d win – their actions empowered their friends, family members and even complete strangers to join the fight for a just future.

This summer we saw record droughts, wildfires and heat waves sweep the nation – but the weather also ignited the climate justice movement, spreading across the country and inspiring everyday citizens to take action to protect their local environment and the global community.

A series of actions dubbed the Climate Summer of Solidarity saw dozens in Montana and West Virginia acting to stop coal mining and exports; hundreds undergoing NVDA training in Texas; and thousands rallying in New York and D.C. against fracking. We’ve shown the fossil fuel industry that we’re not giving up – we’re ready to take action for a sustainable and just future.

Now I’m sending the call out to anyone and everyone: let’s keep the season of solidarity going into the fall.

TransCanada has resurrected the Keystone XL battle in Oklahoma and Texas, where construction has quietly begun on the southern leg of the pipeline. Montana’s State Lands Board is also quietly preparing to lease more than 7,600 acres to Arch Coal for a coal export mine. And New York Gov. Andrew Cuomo publicly supports fracking and intends to open the state up for natural gas extraction.

The odds seem stacked against us, but this last year of climate activism has shown that actions speak much louder than words – and that we win when we keep up the pressure on public officials.

This summer we planted the seeds of social and environmental justice; I can’t wait to see how the movement grows in the fall.

born in the Philippines, raised in the US. I used to be obsessed with pop culture: fashion, celebrities and the like. now all I care about is climate justice, anti-oppression and grassroots organizing - oh, and Oregon. I love Oregon.